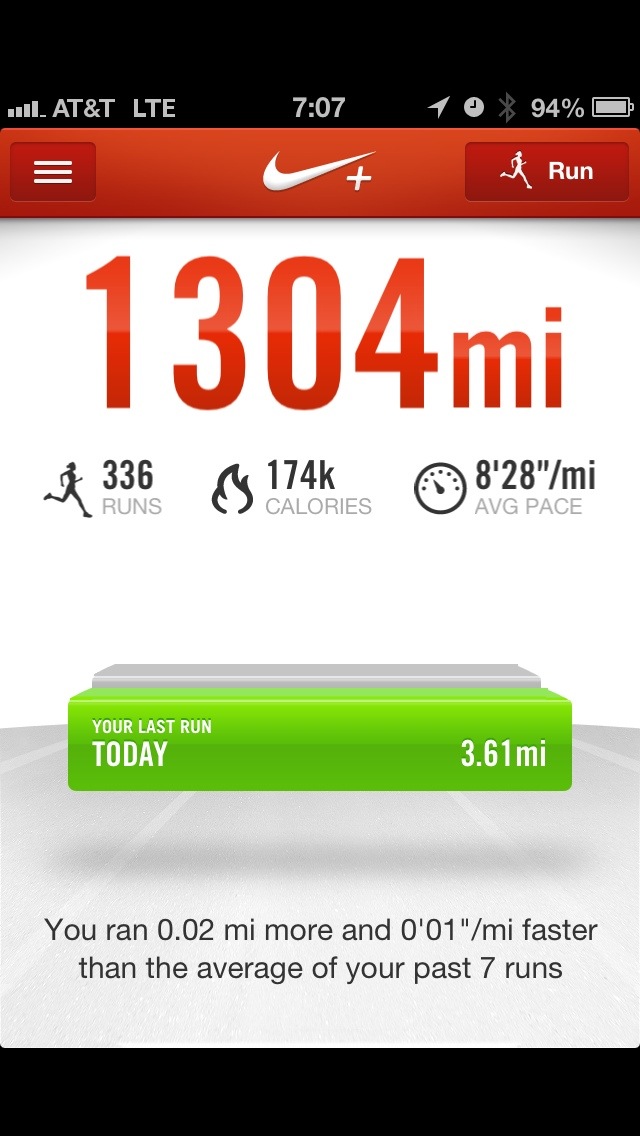 I dragged myself out of bed this morning to go for a run and boy am I glad I did! I ran a bit further than my goal, I am quite awake right now and I have now ran over 1300 total miles with Nike+!

That’s enough miles to run from Purdue to Boston and 1/3 the way back!! 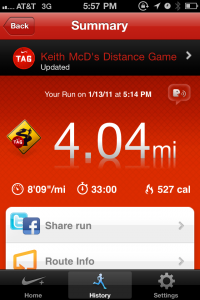 Before I left for work today, I decided that I wanted to run after work as the weather was looking better and the roads should be clearer.  However, just after I left the house I (of course) realized that I had forgotten my running gear.  It wasn’t really worth going back for since I was already running late so I decided to just run a shorter run once I got home.

After I arrived home after work, I took Sparky out after getting into my gear.  While getting dressed I checked for new updates on my iPhone and lookie there – a new Nike+ GPS update!  The latest update (3.0.1) added in Nike+ Tag.  This allows you to play “tag” with someone else – either on distance-based or time-based runs.  Whoever runs the shortest or least-time is “it.”  As my only running friend on Nike+ is Jake, I started a game of tag with him then started my run with a goal of running only three miles.

Once I got going it was clear that this run wasn’t going to be as easy as I’d thought.  The roads were better than yesterday, but as two sections of road that I run on don’t have City Buses running on them, they really weren’t that great either.  As I didn’t have too much ice during the run though, it could have been worse.  When I had run about 3/4 of a mile, I was about ready to just run only two miles instead as my breath was coming right back at me (this can make it harder to breathe as you are exhaling a lot more air at a time than if you were walking which would mean that I’m not getting enough fresh air in on each breath).  However, once I did finally reach the first mile I decided that I wasn’t going to give up that easily and forged on. 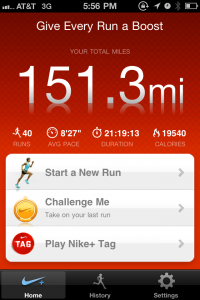 During my runs, the Nike+ GPS app informs me of my distance every half-mile and every ten minutes.  Once I got to two miles, I turned around and made my way back.  I completed my run a short two miles later.  I didn’t beat my earlier run’s average pace, but I am pretty happy with the pace I was able to get – 8’09″/mi.  I’ve been slowly lowering that number over time and hope to have it around 7’/mi by the time I run the Purdue Challenge in April.

Well, I’m a week late on my birthday post, but whatever.  Last Wednesday (June 9), was my 26th birthday.

Justin and I celebrated pretty simply – we went to dinner at Red Lobster and then went home.  Sounds like a good day to me.

Some other items that have happened recently:

I think that covers everything.  Not going to make promises on when I’ll post next as I am bad at keeping them, but hopefully sometime soon. 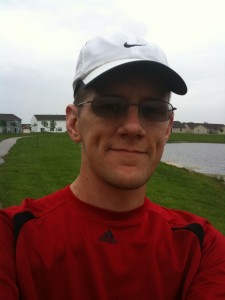 I just finished my 500th mile running with Nike+. I haven’t advanced to the next “color” on the website (the colors are indications of how far you have run with the milestone to reach the next progressively further), however my progress so far is impressive to myself.

Had I looked into my future even one year ago, I never would have imagined myself actually being so healthy and active!Once I completed today’s run I received the following note: 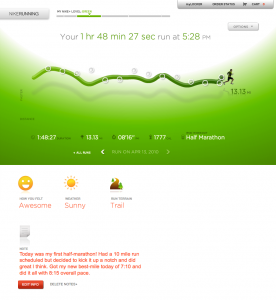 I’ve been on a coaching program from Nike+ which is an intermediate-level 5k program.  Today was the peak run of the program with a scheduled 10 mile run.  However, I decided to push myself to see how I’d do with a half-marathon.  After all, it’s only another 3.1 miles!  🙂