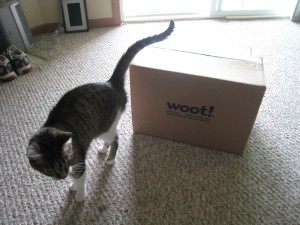 Today I received my first Random Crap from Woot.  I purchased this during the Woot Happy Hour (5pm-6pm EST every Wednesday) on April 28.

I’ve been a member of Woot for over three years but just at the end of April was finally able to get a Random Crap (also called Bag of Crap or BoC).  Normally when one of these pops up (almost exclusively during a Woot-off), the Woot servers are brought to their knees and the site is barely accessible.  As with almost all Random Craps, this one cost $3 plus the standard $5 Woot shipping.

So, after waiting for FedEx SmartPost, which as everyone knows is the slowest shipping method known to humanity, it arrived two weeks later.

Let’s take a look shall we? 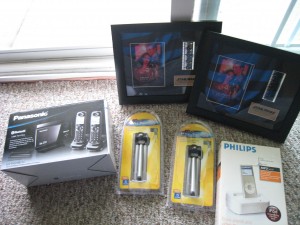 In my box, I received the following items:

Let’s begin by assessing the status of the items.

As with most Random Crap items, it wasn’t without some problems.  The Panasonic thing was missing the manual and a belt clip.  It was obviously a return but seems to work so far.  The Phillips thing was open but had everything with it.  Everything else was sealed.

All in all, a pretty good first Random Crap from Woot.  I’ll be gladly buying another as soon as I can!