Tonight Justin and his family are going through a difficult time. His maternal Grandmother passed away two hours ago. I met her once each time I went to china. She was very nice and kind.

Justin shared some very nice memories with me of times with her. This has inspired me to write a bit about my Great Grandma and Grandpa Cummins.

Great Grandma lived in LaPorte, Indiana and passed a few years after her husband. I vividly remember the entire family going to her house each Halloween and going through the neighborhood for candy. I remember Great Grandpa Cummins and all the amazing things he built in his little shop. I have a cradle he made that Corey and I both were in as babies. I remember burning a winter coat on a heater in his shop as well.

I remember visiting them both often as a kid. They had a large beautiful grandfather clock and a massive stuffed animal that was a dog next to the clock.

I was relatively young when they passed but I thought I’d share a few memories I had.

My first half-marathon took place in October of last year.  Needless to say, this post is a little bit dated!

The race occurred on October 24th, 2010 in Flora, Indiana.  While the original location was supposed to be in Lafayette and West Lafayette, there was a long drawn-out series of events which prevented that from happening.  Needless to say, I won’t be going into that in this post.

After arriving at the town with my family (Justin, Mom, Dad, Corey, Danielle and Zach all came along), we found a parking spot.  As this was supposed to be a fairly sized event but was moved to a very small town, parking really wasn’t very good.  I immediately got into the potty lines, after which it was pretty much time to start the race.  As was expected, it wasn’t really very clear where the line was or if there was going to be sections based on the pace that you expected to keep.  A normal race will have pace sections so that the faster-paced people are in the front – to avoid congestion.

All-in-all, the race wasn’t really too bad.  As it was just a small town, some of the roads could have been better, but there weren’t really any potholes to trip on.  The worst part was at one point when a dog started to chase people and another when we were running past on-coming cars.  I was under the impression that it was supposed to be a close-course.

In the end, I finished the race while beating my goal of completion in under two hours with a final time of 1:55:43.  I would have done better, but I hadn’t really trained for the event as good as I should have.  As such, I actually stopped and had to walk a few times during the last few miles.

Will I run this event again?  Probably not.  The hassle the runners had to go through along with the general organization of the event was quite disappointing.  However, I’m not letting this discourage me from running in other events.  I’m currently registered to run in the 2011 Purdue Challenge 5K along with the 2011 Chicago Half Marathon which both will be great events! 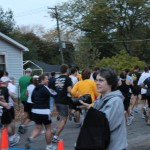 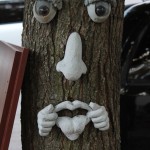 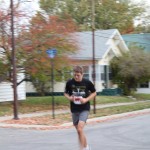 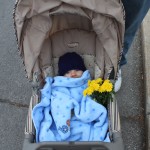 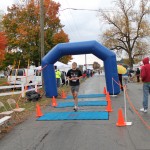 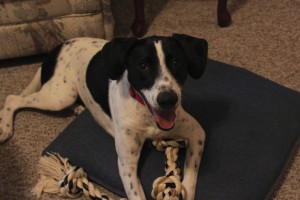 Justin and I would like to introduce you to Sparky, our newest family member. We adopted him from his earlier parents who had taken great care of him and had done all the first legwork of shots, neutering and housebreaking. I greatly appreciate that we got a great friendly dog who is already house-broken!

Sparky is a Dalmatian/Pointer mix. He now weighs about 40 lbs and is 9 months old. Justin had responded, on August 31, to an ad and late Tuesday we went to see him. He was very hyper but just wanted to play and towards the end before we had left was already calming down. So, before we left we agreed that we would take him and pick him up that weekend. After a few visits to various stores on Friday after work, we had all the supplies we would need and picked him up on Saturday morning. The car ride home was interesting – he was trying to chase cars that were going by – I was in the back to try to calm him down though. His first weekend at our house was pretty good. He peed on the floor in our bathroom only once and it was probably because the rug was a green color. Otherwise he lets us know when he has to go out. After a few days of going in and out he already knew which house is his and walks up to the door to wait for us to let him back in.

The only problems that we’ve had, which are going to take time to fix, are that he needs to stop jumping on people and he needs to get used to sleeping in our kennel at night. His previous parents had already been doing that so I think it’s just because of the new surroundings. 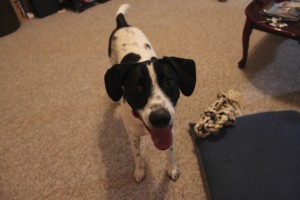 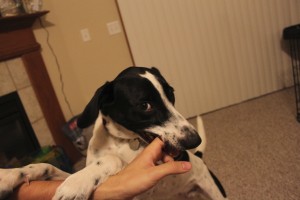